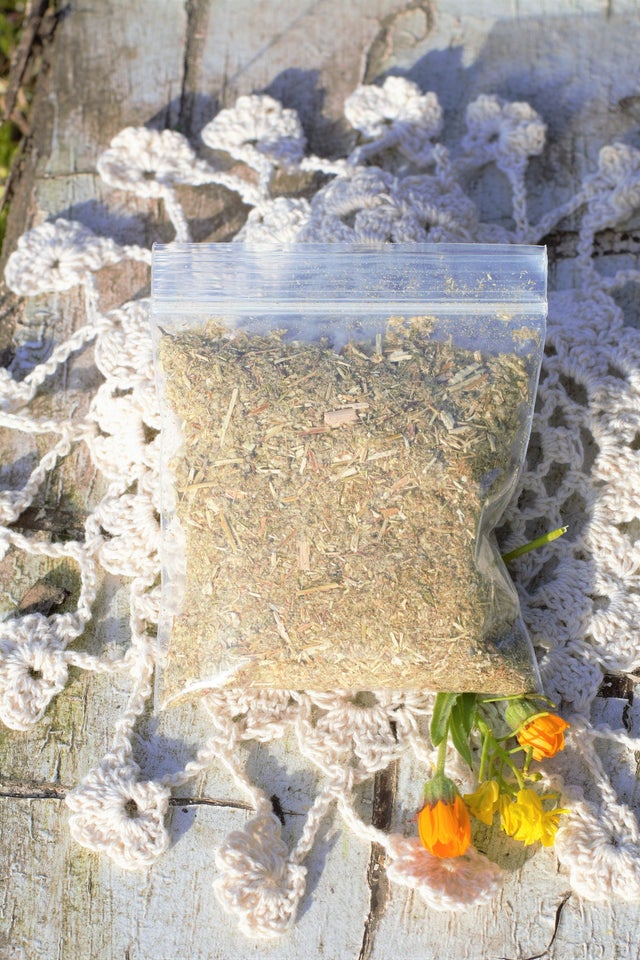 Each bag weighs a little more than 1/2 an ounce.

Included in each bag are 2 charcoal starters.

Mugwort, also known as St. John's plants, or Artemus, has been used for centuries for numerous medicinal and spiritual properties. Roman soldiers would put mugwort in their sandals to keep their feet from getting tired. In Holland and Germany the plant was considered sacred to John the Baptist who presumably wore a girdle of Mugwort.

Mugwort is feminine in nature, associated with the element of earth, and either Venus or the Moon (depends who you ask) and ruled by either Taurus or Libra.

The plants are made into a crown and worn to protect from possession, disease and general misfortune.

Use herbal water made of mugwort to cleanse ritual tools, especially those used for divination.

Mugwort can be used as a sacred smoking herb or burned as a fumigant for protection or divination.

Some say that simply keeping mugwort under your pillow or in your bedroom will encourage prophetic dreams. (Try our Dream and Meditation pillow). If you do keep it in your bedroom, remember that it is closely related to ragweed and the flowers may trigger some allergies.

Burn mugwort in an incense burner as you use divination tools to help open your mind to any messages coming in.

If you are not pregnant, a cup of mugwort tea before bedtime will also encourage lucid dreaming.

Mugwort should NEVER be used INTERNALLY during PREGNANCY or LACTATION or by anyone who has pelvic inflammatory issues as it can cause uterine contractions and can be passed through the mother's milk.

Mugwort should not be used for more than one week continuously. Continued, habitual use of mugwort can cause nervous problems, liver damage and convulsions.

Mugwort flower pollen can trigger hay fever attacks in sensitive people. Some people have topical allergies to mugwort. Test some on your skin before using.

*Please consult your doctor before use if you have any questions. This information is not intended to diagnose, treat, cure, or prevent any disease.