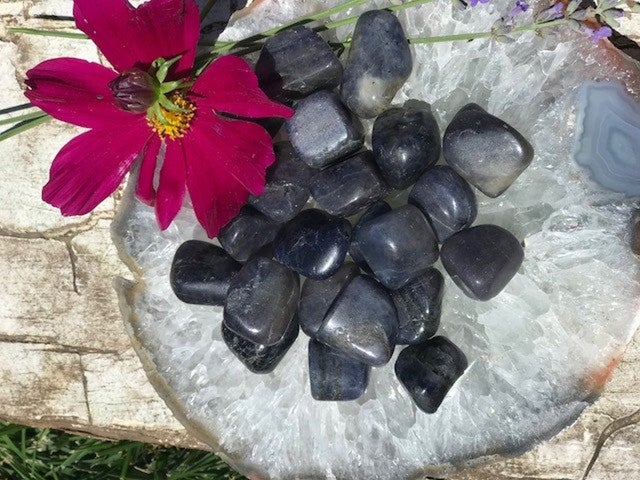 Grade A- Nice purple/blue/gray color, opaque. Each piece varies in size and color due to it's natural properties.

Iolite often displays pleochroic properties, which means that light gets split into two parts as it passes through the stone. As a result, if you look at the stone from one angle, it will appear blue/purple; but if you turn the stone to look at it from another angle, that blue/purple color turns grey and colorless.

Iolite is a stone of the Third-Eye Chakra, and the Crown Chakra. Iolite is very spiritually-oriented and can bring visions when placed on the Third-Eye. You can also use tumbled Iolite for dreamwork or easing insomnia by placing it under your pillow.

Iolite can help those who are having trouble finding the spiritual self. It can help one to recognize the still, small voice within, and to discern the difference between this desired voice and one's ego. Once the voice within has been heard, one can then work with Iolite to reinforce the spiritual message and to assimilate it into one's environment. It can also help with the ability to communicate this message to others with clarity.

Iolite can be an excellent aid for relationship issues, whether they be occurring in friendships, co-workers, parent-child relationships, love relationships, and so on. By carrying or wearing Iolite, one can become empathetic to the point of view or plight of others, bringing understanding to any situation and facilitating the resolution of difficult situations.

Physically, Iolite may help ease the pain of headaches, migraines and eye strain. Wear Iolite when you need to calm your emotions and release stress.